In the biggest boost in decades to train travel in the D.C. area, Virginia Gov. Ralph Northam and CSX announced a $3.7 billion agreement Thursday for the state to buy 225 miles of track and build new passenger rail improvements.

Virginia will buy half of the CSX rail line from L’Enfant Plaza in D.C. to downtown Richmond, which will allow for many more daily Amtrak and Virginia Railway Express trains, and, for the first time, provide weekend service on VRE’s Fredericksburg Line.

“We’re going to be able to dramatically increase Amtrak and VRE service. We’ll be able to get hourly service between Richmond and D.C.,” said Jennifer Mitchell, director of the Virginia Department of Rail and Public Transportation. 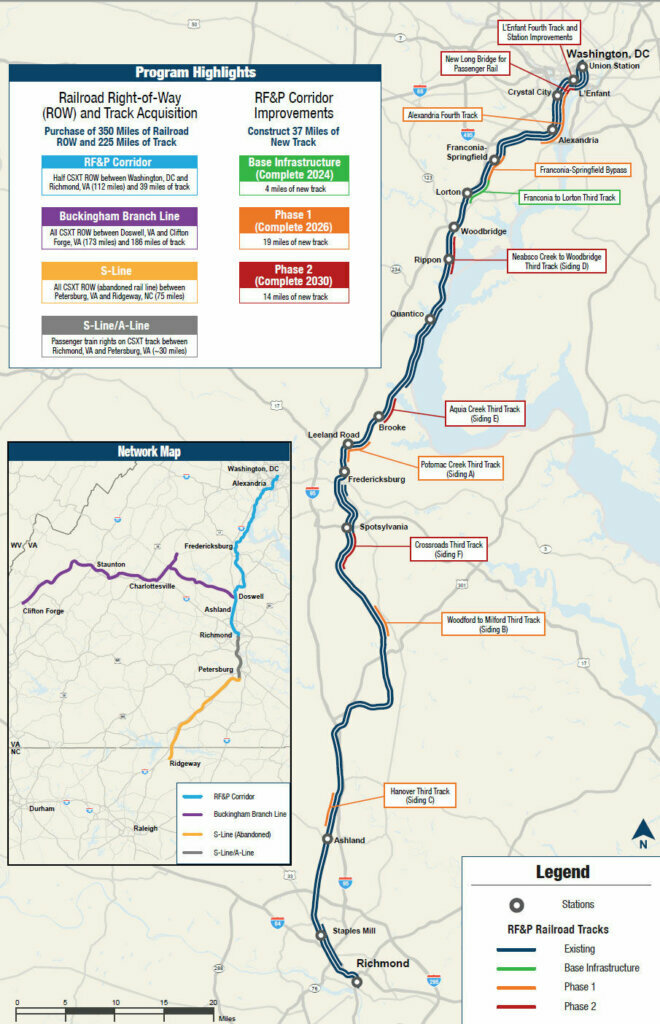 What that proposed passenger rail network could look like under the new deal. (Courtesy Virginia Department of Rail and Public Transportation)

To start, a new round-trip Amtrak train will be added late next year between Norfolk, Richmond and D.C. that continues on to Baltimore and New York.

Also around the end of 2020, VRE could add one new round trip each on the Fredericksburg and Manassas lines.

More trains would be added between 2026 and 2030 as additional construction work on new tracks and the new Long Bridge over the Potomac is completed — eventually doubling the number of Northeast Regional trains running in and out of Virginia.

Under the terms agreed to by CSX and the state, VRE’s Fredericksburg Line will eventually run as frequently as every 15 minutes on weekdays between Spotsylvania, Alexandria, Arlington and the District during a slightly longer rush-hour period than the service currently runs, including later trains in the evening.

The Fredericksburg Line is projected to go from eight round trips today to 13 round trips each weekday in 2030.

The commuter trains would also run on weekends for the first time, providing a long-requested option to avoid terrible Interstate 95 traffic.

Initial VRE weekend service would include at least two trains northbound from Spotsylvania in the morning, and two trains southbound in the afternoon and evening.

The changes could also pave the way for future MARC trains continuing across the river into Virginia, although that idea remains farther off. 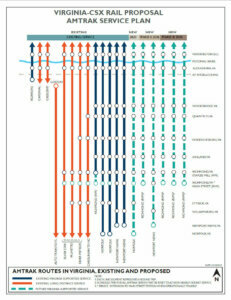 The changes could effectively extend Amtrak’s busy and popular Northeast Corridor 100 miles south, since trains between Newport News or Norfolk, Richmond and D.C. continue on to Baltimore, Philadelphia, New York and Boston.The plan would double the number of longer-distance Amtrak regional trains each day between D.C. and Richmond as part of six additional round trips by 2030. Those trips would also be much more consistent and reliable, since there would be less interference from freight trains.

Funding for Virginia’s $3.7 billion plan is expected to include about $944 million from Amtrak and a similar amount from existing state rail and other transportation funds, with the remainder covered by regional funds, such as I-66 toll revenue; potential D.C. government contributions for the work in and impacting the city; potential Northern Virginia transportation funds for specific projects, such as a flyover for passenger trains near Franconia-Springfield; and VRE dedicated capital funding.

The VRE Operations Board is expected to endorse the plan Friday.

Virginia does not need any new taxes, fees or special appropriations from the General Assembly to pay for the project, Mitchell added.

The $3.7 billion estimated cost over the next decade includes about $525 million for CSX’s land under current or future tracks, about $1.9 billion for Long Bridge construction, and the remainder for other new track construction and related work.

A recent state study estimated adding a lane to I-95 from the Fredericksburg area to the Capital Beltway would cost more than $12 billion, with traffic backing up again soon after the lanes opened, so the project provides significant benefits to the state, Mitchell said.

If Virginia earns additional federal grants for key projects — such as the Long Bridge, since that is an overcrowded chokepoint today for passenger and freight traffic up and down the East Coast — some other pieces of the upgrades could happen more quickly.

The state estimates a new Long Bridge project alone between D.C. and Arlington will provide about $6 billion in annual economic benefits to the D.C. region through a number of benefits, such as improved access to jobs, reduced traffic on the roads and improved freight flow, Mitchell said. 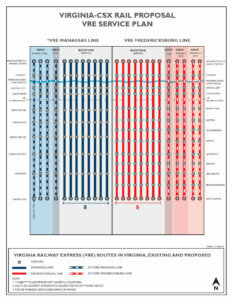 The next service boosts would be scheduled in 2026, when the new, second two-track Long Bridge span over the Potomac River between Arlington and D.C. is finished as part of a total of 19 miles of new tracks and sidings that will go along with station improvements.

The District Department of Transportation recently completed environmental reviews of the Long Bridge project, and Virginia has now taken the lead on getting that project built.

The new purchase of half of the CSX tracks and agreement on additional slots for passenger trains in the network explains why those involved in the Long Bridge project have said for several months that the new span is expected to be designated primarily for passenger service.

Part of the funding for that project could come from I-66 toll payments, since the bridge would also allow for a significant expansion of VRE’s Manassas Line trains.

Manassas Line service increases, including up to three more round trips starting around 2026, would still require separate agreements with another freight rail company, Norfolk Southern. Those negotiations are ongoing.

Still, Virginia’s ownership of some of the tracks along the I-95 corridor, specifically for public passenger services, would allow for trains to run at levels similar to the Long Island Railroad, New Jersey Transit or SEPTA Regional Rail in the New York and Philadelphia area, frequencies that had been significantly limited by CSX’s need to run its own freight services on the tracks.

Virginia and CSX will continue a partnership to maintain the tracks and dispatch trains.

Stay in the Know!

Things move quickly in New Woodbridge! Get updates from the Office of Supervisor Frank Principi for the latest in...

Just enter your email below to stay in the know!

By submitting form, you grant Woodbridge Supervisor Frank J. Principi permission to email you. You may unsubscribe via the link at bottom of each email.