Water Taxis Christened at The Wharf

Supervisor Frank Principi was among the regional leaders on hand to celebrate the christening of four water taxis entering service on the Potomac and Anacostia Rivers; considered a precursor to Fast Ferry commuter service that would offer area residents a scenic alternative to sitting on the region’s congested roadways. (Read about ongoing efforts to bring this service to Prince William County.)

The taxis join others in the Potomac Riverboat Company fleet, which services National Harbor, Alexandria, Georgetown and The Wharf Transit Pier.

“I see today, at least for our city, as the beginning of a new era of transportation in the region,”said  D.C. congressional Del. Eleanor Holmes Norton, who is a member of the  House Transportation and Infrastructure Committee. “I believe that this entire region should be connected through water taxis.”

Supervisor Principi, long a supporter of connecting the National Capital Region via its waterways, sees Fast Ferry service as offering numerous benefits to those living in Prince William County, which would have several ports along its Route 1 corridor. In addition to lessening gridlock, the service could increase tourism to the county, attract large employers and enhance law enforcement and homeland security capabilities. 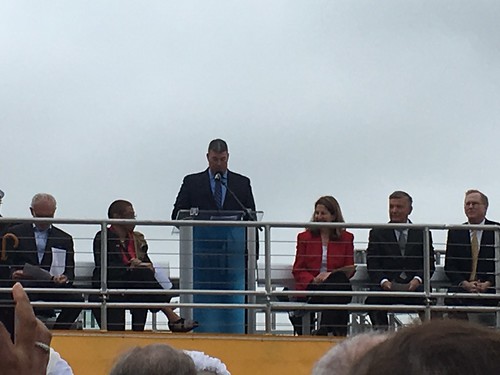 Things move quickly in New Woodbridge! Get updates from the Office of Supervisor Frank Principi for the latest in...

Just enter your email below to stay in the know!

By submitting form, you grant Woodbridge Supervisor Frank J. Principi permission to email you. You may unsubscribe via the link at bottom of each email.